Ink of the Week Winners

“2016 Rick Loux Memorial Broadkill Beach Backyard Cornhole Tournament” and “Fighting Rare Cancer!” are the winners of this week’s Ink of the Week contest!

In 2014, this group of family friends decided to have a friendly cornhole tournament during their vacation at Broadkill Beach. In a sudden turn of events the morning after the tournament, one of the friends participating had a brain aneurysm and he sadly passed away later in the week. The following year, these family friends took the same beach trip and named the tournament in his honor. They ordered custom shirts for the first annual Rick Loux Memorial Broadkill Beach Backyard Cornhole Tournament and the tradition has stuck ever since. All money collected from the tournament is donated to K9s for Warriors, the charity in which memorial contributions were sent to after Rick’s passing.

Year after year, Team Fatma rides at Cycle for Survival – the movement to beat rare cancers – in New York City. This group of friends and family ride in honor of Fatma Kamara, who lost her battle with ovarian clear cell carcinoma at the age of 37. For four years running, Team Fatma has turned to CustomInk to unite the riders in teal blue cycling shirts. The custom shirts are adorned with a “we are doing it!” motto.

Ink of the Week 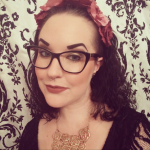 Jeslyn is a Social Media & Content Coordinator at Custom Ink.